Ear Polyps in Pets: What Pet Owners Need to Hear 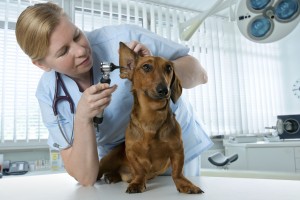 Most times an ear infection is a pretty easy problem to solve. Sometimes, though, we will run into an infection that won’t clear or that keeps on coming back. In this instance, it is likely that there is something going on that is predisposing that ear to have problems.

One of the more common diagnoses in complicated ear infections in pets are ear polyps. Find out what you need to know about ear polyps in pets and how they affect your animal.

What is an Ear Polyp?

An ear polyp is a variation of a tumor. All tumors are cells that grow outside of normal control in an abnormal place. Ear polyps, obviously, are an abnormal growth within the ear canal.

Most growths in the ear are little polyps attached to the lining of the ear canal by a stalk. These little tumors are often one of two kinds:

Just like most forms of cancer, we don’t always understand why pets develop ear polyps. We do know, however, that chronic inflammation within the ear canal can lead to overgrowth and polyp development.

Most ear polyps can be diagnosed with an otoscopic examination. Many of them are deep within the ear canal, though, and some may require sedation to be visualized. Occasionally advanced imaging such as a CT scan or MRI is required.

Ear polyps are fairly common in cats and dogs with frequent ear infections such as Cocker Spaniels.

How Are Ear Polyps in Pets Treated?

If an ear polyp goes untreated, it often interferes with an ear’s normal function, resulting in waxy buildup and chronic infections. This can be smelly and painful for your pet. The physical presence of the polyp can be irritating, and, if in the right location, interfere with hearing or balance.

Typically, the most effective treatment for pet ear polyps is surgical removal. Luckily, most of these are only attached by a long, thin stalk so they can be pulled up into an area where they can be seen and removed easily. This technique can have a high recurrence rate, though, as the base of the tumor is usually not able to be removed.

The most effective way to remove ear polyps in pets is a technique called a ventral bulla osteotomy. During this procedure, the lower part of the bone that surrounds the inner ear is removed to allow better access to the ear canal. This is a procedure performed by a veterinary surgeon such as those at Oakland Veterinary Referral Services.

Ear polyps can be a frustrating problem, especially when they are the cause of repeated ear problems. If your pet suffers from these annoying growths, we are happy to discuss your options with you. Please let us know if we can be of help.