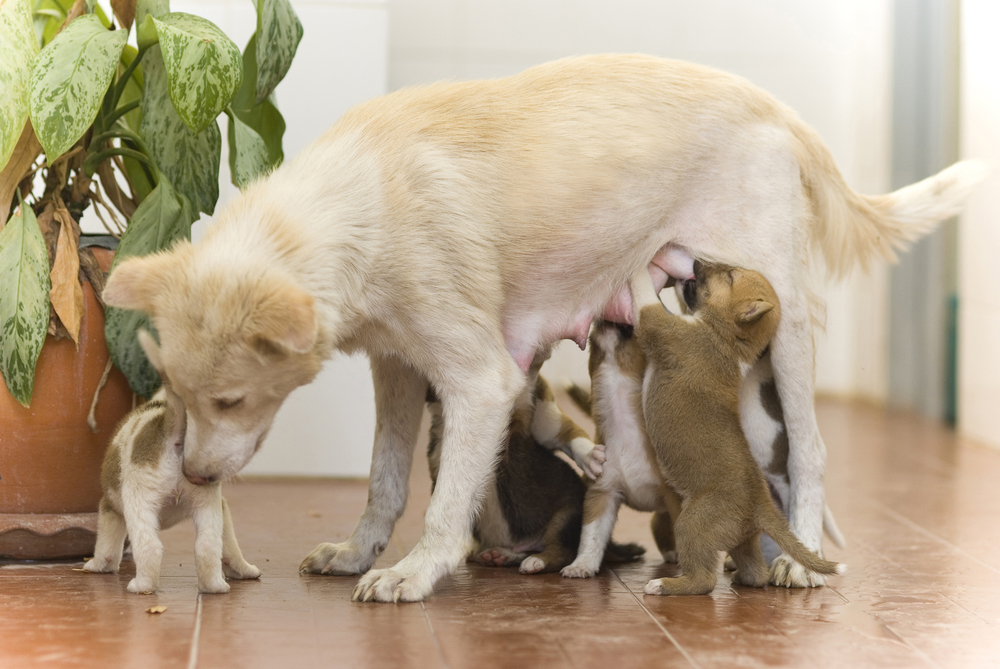 Normal puppy litter size tends to vary from one to twelve. The world record according to Guinness is a whopping twenty four puppies, birthed by a Neapolitan Mastiff in the UK in 2004. Why does litter size vary so much and what determines litter size in puppies? OVRS looks at the main factors affecting litter size.

The breed of dog is the biggest determinant of litter size. Generally, big dogs have larger litters because, biologically, they’re able to safely carry more puppies.

Here are a few breeds and their estimated litter sizes:

While the norm is that larger dogs have larger litters, it’s not always the case. For instance, the Pekingese, weighing in at just 7-14 pounds, may give birth to as many as 10 puppies.

Big litters can be dangerous to the mother dog (dam) due to delivery problems, especially in smaller dogs. Some of the puppies may be delivered stillborn, and the dam may become exhausted during delivery.

Reputable breeders want more puppies if they have a lineup of people wanting them. Dog owners may want more bundles of squirming puppy joy from their canine companion. Humans have control over certain aspects of when and how a female dog is bred that can affect litter size, but there are limits.

Artificially inseminated dams produce smaller litters than those impregnated naturally. This is likely due to more sperm dying during collection and insemination.

Another key factor that affects size is when a dam gives birth to a litter of puppies. According to the American Kennel Club, litters born in the spring are generally larger than litters born in other times of the year.

Are There Other Ways To Affect the Size of a Dog’s Litter?

The age of the dog when breeding plays a key part in litter size. The older the dam, the smaller the litter, especially in larger breeds. Dams bred from 2-5 years usually have the largest litters.

Despite the age of the dam, the first 2 litters will generally be smaller than the ones afterwards. According to an article in Royal Canin, the 3rd and 4th pregnancies are generally the largest.

The age of the male sire plays a part in litter size as well. After 5 years, the sire’s sperm count and quality begin to diminish. At 1.5 to 5 years, there is more of a chance of the sperm fusing with the dam’s eggs. The most famous champions tend to be bred until the approximate age of 5.

Do Genetics Play a Role in Litter Size?

The answer to that is yes and no.

What Part Does Nutrition Play in Litter Size?

Nutrition plays a big part in determining the number of pups in a litter. A quality diet rich in protein should be eaten all year in order to maximize the chances for a larger litter. Dams with less than healthy diets, including those that are overweight, yield smaller litters.

A pet parent or breeder can choose their breed, breed them at the optimum time, and feed them highly nutritious meals throughout the year. But, they cannot determine the size of the litter – that’s up to Mother Nature.

Pin
Tweet
Share
Tags: Kittens | Litter | Pet Litter | Pregnant Pet | Puppies
Posted in: For The Dogs | Puppies & Kittens | The Cat's Meow
Previous: The Death-Defying Art of Bathing a Cat
Next: Cancer in Cats: Recognizing and Reducing the Risk for Your Feline Friend