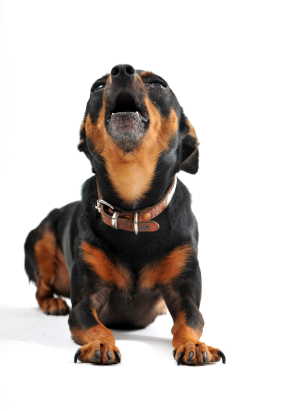 Have you ever heard of laryngeal paralysis? This condition that mostly occurs in dogs can cause serious respiratory distress, sometimes leading to death. Learn what you need to know about this scary condition.

The larynx, or voice box, is located in the throat. Not only does it control our voices, but it is also an important part of the respiratory system. It closes the windpipe off from inhaling food and drink. When we take a breath, it holds the airway open so that our lungs receive the air. In dogs that have laryngeal paralysis, the muscles that hold the larynx open do not work properly. This means that when the pet needs to take a deep breath, it cannot. Sometimes the floppy muscles can even partially close off the airway.

What are the symptoms?

Laryngeal paralysis does not happen suddenly. Most dogs will have symptoms of panting, breathing loudly, or getting tired quickly long before the situation becomes emergent. Common symptoms include panting a lot, exercise intolerance, change of the animal’s “voice,” loud breathing, and gasping. Most commonly, these patients are older large-breed dogs (usually Labrador Retrievers).

We don’t know. There seems to be some nerve dysfunction in affected pets, but as of yet no on has gotten to the bottom of what causes laryngeal paralysis.

How is it diagnosed?

In order to diagnose laryngeal paralysis, the veterinarian must visualize the larynx at work. This can be tricky because visualization requires some sedation, but the level of sedation cannot be so much as to affect airway function.

If the disease has progressed enough to lead to a respiratory crisis (the patient cannot breathe), it is vital that the patient be treated so that the airway can be opened to prevent lack of oxygen and overheating from panic. After that, or if the problem is caught before a crisis ensues, there are several surgical solutions that exist. The most commonly performed procedure is called a laryngeal tieback. It involves placing stitches so that one of the flaps at the back of the throat is permanently held open a little bit. There is a fine line between moving the flap too little and too much, however. The most common complication of the procedure is that the patient can no longer protect its airway from food and water and develops pneumonia after breathing these things into the lungs.