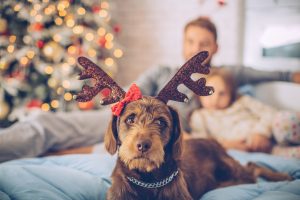 No one (except maybe Ebenezer Scrooge) could argue with the magical splendor, festive revelry, and spirited generosity that seem to be everywhere this time of year. While it’s simply wonderful to participate in the endless social events and family gatherings, sometimes you just need a night in. If curling up under a chenille throw with your best furry friend doesn’t sound reasonable enough, perhaps our list of holiday films featuring animals will entice you. Go on, get comfy!

Holiday movies have that charming je ne sais quoi that other films just don’t have. Of course, old standards like Elf, Home Alone, and A Christmas Story have their place among all classics. However, our favorite holiday films featuring animals not only elevate the experience of pet ownership but also highlight the power of the human-animal bond.

Staying focused on “the big man,” we think the following choices are great picks for your “pet flix” movie night (or entire weekend):

The Dog Who Saved Christmas tells the story of Zeus, a sweet and trusty yellow Lab who saves his family from two burglars. Sound a bit like Home Alone for dog lovers? Nothing wrong with that!

In A Dog Named Christmas, a developmentally challenged young man who cares deeply for animals encourages everyone in his family and town to participate in a dog adoption program at the local shelter. Don’t forget to grab a box of tissues for this one!

While not specifically a film about the holidays, there are some touching Christmas scenes in Hachi: A Dog’s Tale. Telling the story of a college professor and the strong bond with his adopted Akita, this film has the potential to melt even the hardest of hearts.

Looking for holiday films featuring animals that won’t leave you in a mushy puddle of emotion? Kids – and those young at heart – cannot resist Alvin and the Chipmunks: A Chipmunk Christmas or A Garfield Christmas. To be sure, both are dated, but they stand the test of time to hit a spot you didn’t even know you had.

After you’ve seen the aforementioned titles, we have some other ideas. Although not exclusively holiday-themed, the following movies are fun and fascinating to watch:

Whether you see one or all the films on our list, the team at Oakland Veterinary Referral Services hopes you find time to snuggle up with your pet to enjoy the finer moments in life.

Pin
Tweet
Share
Tags: Pet Flicks | Pet Holidays | Pet Movies
Posted in: You & Your Pet
Previous: More than a Cage: The Benefits of Crate Training
Next: New Puppy? No Problem!