Ear Infections and Your Pet 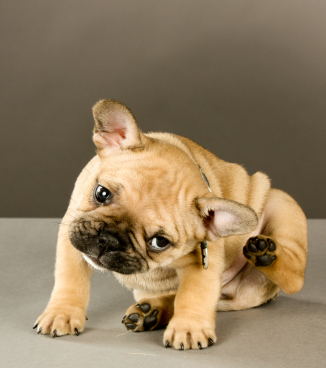 Is your pet pawing at his ears? Or maybe he or she has been shaking its head.  Perhaps you have noticed swelling, redness, or an abnormal odor emitting from your pet’s ear canal? If so, your dog or cat may be presenting symptoms known as Otitis, a dermatological condition caused by an ear inflammation or ear infection of the external, middle, or inner ear.

Otitis is the symptoms associated with the inflammation or infection of the external (Otitis Externa), middle (Otitis Media), or inner (Otitis Interna) ear.

Many times a pet can be chronically affected and will have one or more causes of Otitis, with one or more symptoms involved. Unfortunately, many pet owners may not know that their pet is suffering from an ear infection or disease until more than one symptom has presented itself.

Often, Otitis can be caused by food or environmental allergies, endocrine diseases such as Hypothyroidism, foreign bodies lodged in the ear, and parasites such as fleas or mites. Bacterial and yeast infections of the ear can cause Otitis as well.

Otitis Externa is often reported as one of the most common complaints of dog owners, with cats affected less often. Common signs include:

Otitis Externa is brought on by excess hair in and around the ear, polyps, and excessive moisture in the ear canal. If Otitis Externa is not detected and treated in a timely manner, the following can occur:

Commonly referred to as middle ear disease, Otitis Media can occur alone or in conjunction with external or inner ear disease. This condition, which is due to the inflammation or infection of middle ear structures, can cause the following symptoms:

What To Do if Otitis Symptoms Appear

If your pet is presenting symptoms of Otitis Externa, a visit to your regular veterinarian is in order but can usually wait until regular business hours, unless symptoms persist or worsen at an alarming rate.

However, if your pet is showing signs of Otitis Media or Otitis Interna, please contact us immediately for instructions. Often these conditions require immediate care.

At Oakland Veterinary Referral Service we are equipped to handle dermatology emergencies such as Otitis. If you are concerned that your dog or cat is suffering from any of these symptoms, please don’t hesitate to contact us with questions or for assistance.